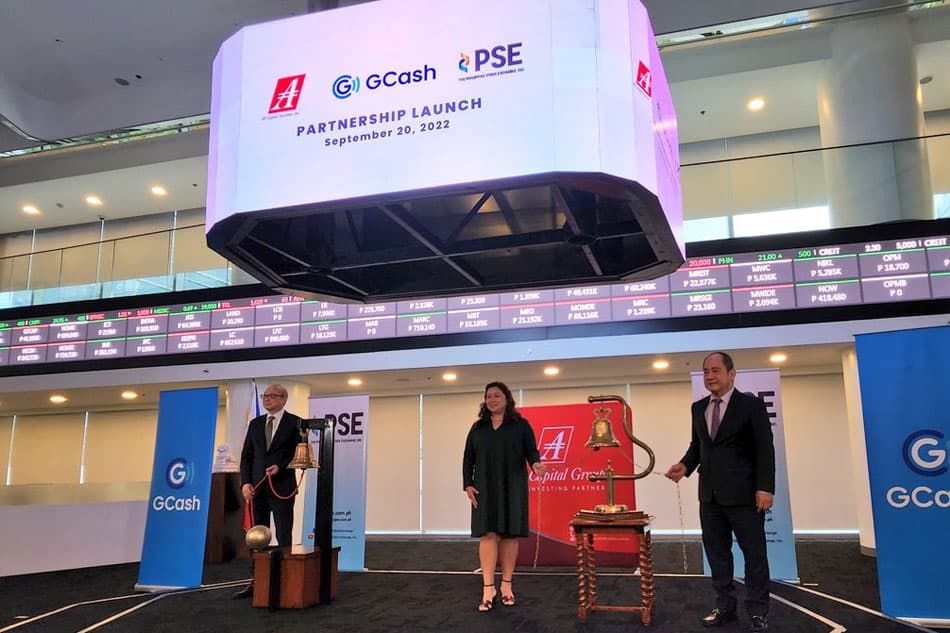 MANILA (UPDATE) – Users of GCash will soon be able to invest in the stock market after the Ayala-led fintech partnered with the Philippine Stock Exchange and AB Capital.

PSE President Ramon Monzon, along with GCash president Martha Sazon and other officials made the official announcement on Tuesday, with the soft launch of the service targetted for November.

The new service, named GStocks will be similar to the GInvest service that is already being offered, except that it will allow users to choose any specific stock they want to trade.

Sazon said GCash’s new feature will allow more Filipinos to invest directly in the stock market through affordability and access.

“Just by making available to everyone and making it easier for them to click on the funds, definitely there’s already exponential increase in take-up,” Sazon said.

With over 69 million GCash subscribers, Monzon said this partnership could help increase the country’s retail investor base in a very short period of time.

“This endeavor is a game changer for the Philippine stock market, because of its potential to double or triple or even quadruple the stock market investor base in a very short period of time,” Monzon said.

Monzon noted that the PSE only has 1.6 million accounts. This represented only 1.5 percent of the country’s population.

This investor count is a far cry from the United States, where 6 out of 10 Americans own stocks, including 36 percent of people who have never gone to college.

AB Capital Chairman Antonio Periquet believes there is a market for the country even if many Filipinos live below the poverty line.

“Poverty or lack of wealth really only tells part of the story, the other part has to be the access or the lack of access,” said Periquet.

Even India, where the per capita income is just two thirds of the Philippines, stock ownership is at almost 5 percent of the population, Periquet noted.

GStocks will have soft launching in November. No details on fees and other information have been disclosed yet. GCash officials said there are 1 million GInvest users and they expect GStocks to have more than a million users initially.