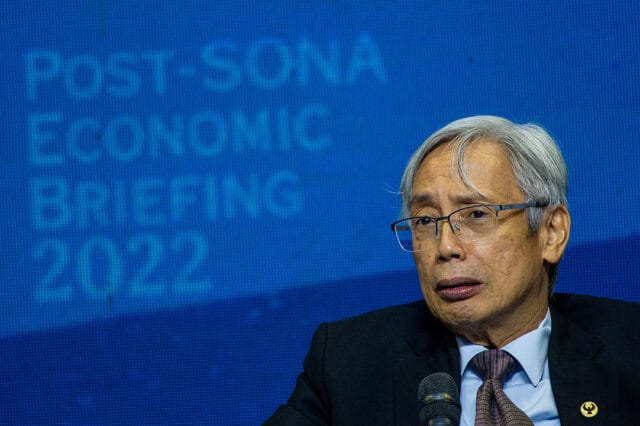 THE BANGKO Sentral ng Pilipinas (BSP) said it has room to further hike policy rates this year to support the peso as the US Federal Reserve is expected to continue its aggressive policy tightening.

This as the Philippine peso on Wednesday closed at a record low of P57.135 against the US dollar.

“These are challenging times because US interest rates are not just high but these should get higher. In turn, that means possibly, a weaker peso as shown in the case of yen (and) euro,” BSP Governor Felipe M. Medalla said at a Philippine economic briefing in Singapore on Wednesday.

Fed Chairman Jerome H. Powell has made it clear that policy makers are prepared to raise rates as high as needed to cool inflation. Markets are now pricing in another 75-bp increase at their next meeting on Sept. 20-21.

The Monetary Board’s next meeting is on Sept. 22.

Since May, it has raised borrowing costs by 175 bps, bringing the benchmark rate to 3.75%.

Despite the aggressive rate hikes, Mr. Medalla said the overnight repurchase rate is still lower than the BSP’s 5.4% inflation forecast for the year.

“Monetary policy still has much room. Whatever happens we have the capacity to make sure that we will have…a target consistent with the inflation path,” he said.

Headline inflation eased to 6.3% year on year in August, from the nearly four-year high of 6.4% in July. It marked the fifth consecutive month that inflation went above the BSP’s 2-4% target.

“There are forces that are working in our favor. If US monetary policy becomes too restrictive, demand will fall and the things we import will fall because right now the increase in our current account deficit, two-thirds of that is because of high prices of the things we import,” Mr. Medalla said.

“There’s more downside than upside, but on balance, we are confident we have enough room. The economy’s strong enough, the banking system is strong enough and the payment system is also improving very fast,” he added.

The Philippine economy expanded by 7.8% in the first half, above the government’s 6.5-7.5% goal for the full year.

“Fortunately, despite this very difficult environment, we have one thing going for us. We are looking at the scenario where we have no more lockdowns. (Pent-up demand) will enable us to grow very fast despite tightening monetary conditions,” Mr. Medalla said.

“The key then is to achieve predictable inflation without necessarily bringing down growth too much.” — Keisha B. Ta-asan